More On Uncertainty Creating Its Own Reality

The following two items from the daily CFA briefing [10/21] were interesting addendums to what was previously posted regarding how uncertainty can impact markets, cash flow and the economy.

Indexes developed by academics at Northwestern University, Stanford University and the University of Chicago show how political uncertainty worldwide is weighing down trading with a virtually unprecedented effect. Investors are responding by turning to cash and other defensive assets and are developing strategies to safeguard against a downturn. The Wall Street Journal (tiered subscription model) (10/2)

Loan growth slowed for top US banks
Loan growth for JPMorgan Chase decreased by $12 billion between July and September of this year while loan growth was slow for Bank of America, Citigroup and Wells Fargo. The decline in loan growth is not surprising because economic growth is slowing, according to Paul Ashworth, chief US economist at Capital Economics. CBS News (10/18)
0 comments

The attached article by May Wong details the creation of the World Uncertainty Index by Stanford economist Robert Bloom. More at: http://policyuncertainty.com/ 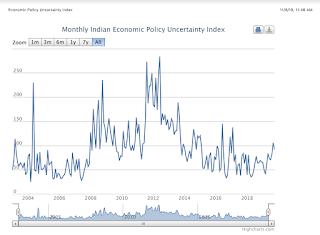