Using the Chicago Fed’s forecasting template, I have revised my original 2019-2020 US economic forecast to somewhat account for the extraordinary events that have occurred since last December, seemingly several lifetimes ago.

I have updated the 2019 4th quarter and whole year numbers to reflect what has actually been published and is available from various government and private sources. I have also accessed data available for either all or part of the first Quarter of 2020.

Still projecting forward as might be expected has many challenges. I have tried to base my estimates on a significant downturn similar to the Great Recession but not the Great Depression. I will try to keep these estimates up to date, though, as new data becomes available. As indicated in an earlier blog I am estimating the second quarter to show 7-8% negative growth with a sharp uptick in unemployment. The recent record jobless claims while having some impact with respect to the first quarter were diluted in terms of their reported first quarter unemployment, GDP and consumption effects because they occurred in the last two weeks of the quarter. Their full impact will become apparent in the 2d quarter. The ten million applicants while historically enormous is still only about 4% of the US labor force. But this is enough to double the unemployment rate to more than 7%. Hopefully as the quarter evolves and the large government stimulus plus the large hiring unusual in a recession by firms such as WalMart, Amazon, CVS, UPS and Fedex take hold, the unemployment rate will stabilize in the 7-8% range. I have built this scenario into my forecast.

The most difficult estimate and which will probably require the most revisions is government expenditures. This is because the stimulus programs will take time to ramp up as indicated by the difficult start to the one for small business loans. In addition, different pieces will be going to different states and organizations and the timing of their expenditures is also unclear. Finally, not all elements of the stimulus packages are government expenditures but are loans plus tax deferments and credits. Thus, I have put in about $1 trillion increased government expenditures spread out and increasing over the next three quarters. While I think the timing is about right, the level and ultimate impact on GDP and employment remains foggy. My hope is that as we begin this forecasting venture that it will prove helpful to some and that I can keep my eye on the data and the evolving economic conditions without bias. 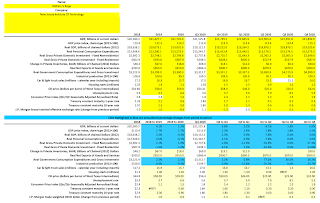